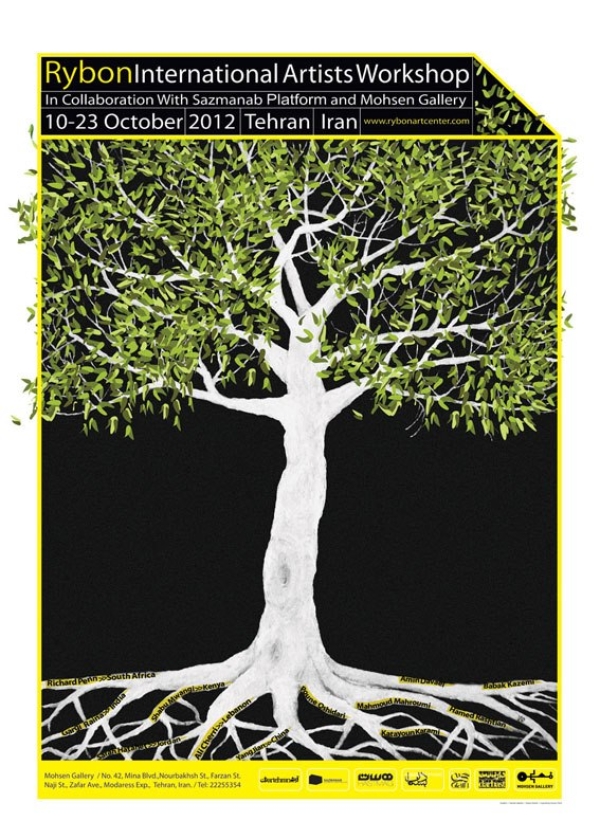 An introduction to Rybon The first international workshop

In the early years of the twentieth century, a number of artists, mainly from Germany, decided to employ expressionism concept in an artistic style. One of the most important theses of this movement was going beyond the determined boundaries of the art media and the notion of group art making. Thus, we encounter paintings which instead of the painter’s name have the name of De Broke workshop on the canvas. We have Kirchner, the painter who sets to history and literature, Schoenberg, the musician, does painting and Kukushka, the painter, writes poetry. In 1918 a rebellious manifesto was introduced to the art world which, instead of the artists’ names such as Andre Breton, Max Ernst, Joan Miró, André Masson, Man Ray, Duchamp, and Éluard ends with something called Surrealism: a title which surpasses its creators though it has a footprint of each of them on it and …

The contemporary artists may encounter the phenomenon of the collaborative art in two different ways. Some artists make occasional use of workshops and international residencies as a chance and reason for creating and presenting works of art, in addition to their trend of routine work. Some other artists basically work in workshops as a routine. Believing in this classification is important because it makes us directly face with the theoretical challenge hidden in this newborn form of art making: creating work of art in a private or a public space!

As far as our discussion context concerns with visual arts, creating art in media such as painting, sculpture, printing and photography, they have always been created in a private domain, and therefore in private places and studios. This traditional trend of creating art, not only permitted the artist to concentrate on his work but also at a social level, guaranteed his professional privacy, safeguarding his inspiration and creativity sources and personal techniques, and sometimes for this very reason adding to his mysteriousness. Now in the new conditions, collaborative art, not only changes the individual mode of artistic work into a collective matter, but also is willing to reveal the secrets of the artist’s works and share them with other artists and the viewers. On the other hand, workshops due to their temporary nature require the work of art to be created in a timely scheduled process. And at the same time that this time limit can be considered an excuse, with a theoretical innovation has lead to a new concept, namely art in process which instead of conventionally evaluating the final artistic product, looks at the process of the artistic creation and considers the work of an artist in residence as an open file whose importance lies more in its start and its motivations rather than a definite finalization. Linguistically we could say, such approach to work of art mainly tends to verbal forms (what is being done) rather than to nominal forms (what has been done)! Although, the origin of this approach can be tracked in a historical route down to eighteenth century Romantics, but obviously the evolved form of art in process as one of the inevitable conceptual outcomes of collaborative art is something that not all artists are willing or capable to wish for its fulfillment! And right for all these reasons the collaborative art should be considered as a very specialized action in the heart of contemporary art. Collaborative art, in pluralistic tone of contemporary art is a necessity and the artists practicing it, either as their main trend or not, will face a new challenge which will define us a new experience of work of art.

With this introduction, we are facing the first international artists’ workshop held by Rybon in Tehran, and this can be the evidence of the accounted discussions. In this workshop which no distinct theme or subject had not been suggested to artists, six Iranian artists beside 5 foreign artists exchanged information and ideas for two weeks and finally their works of art were presented in a group exhibition. In the exhibition one can find the concepts of collaborative art and art in process, though with different extents in different works.

To be more exact, among Iranian artists, Amin Davayi, in an interesting innovation, during the workshop covered the head of his fellow artists with plastic bags and took shots in close angle as they were struggling to breathe. He showed his final video in a glass pyramid so that by changing the pov of the viewers the faces changed. In fact, this very interactional aspect should be considered as the salient point of his work, because here it is the viewer himself/herself who can choose the face of the victim. Though the selective action of the viewer would not make any difference in the definite identical fate of the faces: a thought provoking approach of determinism and free will paradox; Babak Kazemi, on the other hand, with help of his sculptor friends puts figures in open barrels and makes an oil bath. This work of Babak can be considered as the extension of a collection of projects which he has done in the last decade dealing with oil, and the most important of which may be a multimedia about the history of discovering oil in Iran! In his other work which had a more collaborative aspect he gives a pillow to each non-Iranian artist to express his/her feelings about his/her stay in a new atmosphere on it. Then takes photographs of the pillows which carry the feelings of artists with them and exhibits the photographs in frames: somehow, this may be the only work in the workshop in which other artists’ ideas have been appropriated in an interactive process; Hamed Rashtian builds a humble impermanent shelter with cement blocks to hold unwritten books, in order to stop the viewers for a few moments and invite them to contemplate on absence of the things. On what does not exist. On books which have only a title: titles that like a mirror reflect each reader to himself and his imagination; Katayoun Karami in a developing processable art, paints a big wall in uniform white, lets the paint gradually wither and leave crusts: the crusts which like dead leaves of Tehran trees in autumn indicate nothing but instability and suspension; this theme of decay and destruction appears in Mahmoud Mahroumi’s work in a more familiar way. In an interactive work he takes photographs of the viewers prints the photos simultaneously and puts the photos immediately in a shredder thus interweaving and deforming the destiny of hundreds of different photos: in fact Mahmoud like Boltanski or Joachim Schmitt distorts the objective aspect of photographic image to keep its memorial aspect in order to challenge the identity and individuality of the people; Pooneh Oshidari, however prefers to paint in her traditional process instead of using compound facilities of the media. So the importance of her work lies in subject and message she has picked for her work: emphasis on universal concepts such as death and life, and its more cultural form, war and peace. Undoubtedly, in a time that world is increasingly exposed to violence, her message will be understood more clearly.

Among foreign artists, except for Yang Jian from China, the footprint of encountering Iran-Tehran culture is omnipresent. Yang Jian’s work is a very attractive installation in which a walnut tree has become a subordinate of its own yield. In this work the extent of bending of the tree depends on the height of a bagful of walnuts: the reverse equation of creator and created in the bosom of the nature or a metaphor of industry-culture of consumer-oriented societies in which the producer has never been as important as his products; Gargi Raina, from the aspect of artistic background can be considered the most experienced artist of the workshop. Her work whether as video or historical Persian manuscripts in traditional medicine of Kashmir as a family heritage, are extensions of her long term works, though with a difference: this time the artist has been inspired by Tehran historical palaces and has beautifully added a new element, that is mirror, to her work. Gargi’s work is original and mysterious and of course promising: a path through wound to healing; Sarah Hatahet, from Jordan has picked Tehran urban spaces as her subject and has depicted them in ink drawings: it seems that focusing on elements like stores and streets signs and graffiti is going to create some typical images of the city; Ali Cherri, from Lebanon, in his work makes use of Iranian national flag. This flag had been installed a couple of months ago in one of Tehran’s highways and had been unveiled by the Mayor. Ali, by combining real images of this flag and three dimensional designing through software, projects the flag in spite of its huge size, on different surfaces of walls and ceiling: re-representation of the flag as a national symbol; Richard Penn, the last artist of the workshop, from South Africa deals with no signal sign which because of parasite waves blocks some TV channels. By joining this sign with a scientific theory he both gives notice of the world creation experience and also reminds of losing communications. His work is a relatively big wall painted with horizontal black, white and gray lines: an extremely apt-to-interpretation work which can be an icon of the TV noise, or bring to mind the closed shutters of a public place entrance as a deterrent force, or in artist’s unconscious be an indication of racial boundaries between the black and the white people in the artist’s society or the like. Richard has even integrated Babak Kazemi’s presented pillow into his own art work, thus proposing the psychological concept of Torn from Sleep: to wake up suddenly and passing some moments at the gap between reality and dream!

What was mentioned above was only a short review of an exhibition which may well be called the first international workshop held by private sector in Iran. The art works of this exhibition, though with an evaluative look cannot be placed in the same level, each show a glimpse of the collaborative art and art in process concepts. With limited capacity of Iranian contemporary art, this exhibition is like spending some time in the span between reality and dream!